This year, I read the classic book Rhetoric by the Ancient Greek intellectual Aristotle. This is the foundational text for persuasion and rhetoric. It has the whole “logos, pathos, ethos” thing that we learned in middle school.

But there was one concept that Aristotle mentions at length, which he called enthymemes…

Which explains ALL of what makes Spongebob memes so powerful.

(Originally I wrote a 5000-word version of this, so if you’d like to read more, subscribe to my email list and shoot me an email, and I’ll send it your way.)

An enthymeme is hard to define without using Aristotle’s jargon, but here’s my working definition:

An enthymeme is when you make an argument based on an assumption, rather than something explicit.

This is how memes work. Memes make arguments based on the assumption of what the image and the text mean.

There is a common cultural understanding, for example, that when Spongebob is in a chicken pose, and when the font is all mixed up with uppercase letters, the meme is meant to mock something.

We don’t have to explain it. Everybody who’s “in” on the meme, gets it without any explanation necessary.  As Aristotle said, “If any of these propositions is a familiar fact, there is no need even to mention it; the hearer adds it himself.”

This allows memes to move an argument forward with very few words.

Without these assumptions, these enthymemes, memes simply don’t work. If you show it to your grandma she “won’t get it,” because she’s not queued into our common cultural understanding, to the enthymeme.

Here I also want to cue us into the fact that memes are not all fun and games, they’re used as explicit persuasive tools.

Memes shape our buying decisions, opinions of brands, political opinions, and more, the same way any piece of persuasion can.

This is a spongebob meme about spongebob memes. This is the kind of extreme territory we’re going to get into here, so buckle up your barnacles.

The secret formula of Spongebob memes is that they’re particularly suited for enthymemes, and therefore, a common popularity.

Spongebob memes are by far the most popular on the internet.

A generation after Spongebob stopped making its best episodes, the show continues to be insanely popular, and the meme culture is a huge reason for that.

There are 3 elements of Spongebob that make them uniquely suited for meme success.

All of these are possible because of enthymemes.

Let’s look at an example of each…

Paul Tibbitt, the head artist of Spongebob, said that “Spongebob was a story-driven show, not script-driven,” in an interview with New York Magazine.

They began with different scenes and images that connected into a story, rather than starting with a script and allowing that to develop into the images.

This led to freeze-frames with easily identifiable facial expressions, which are ripe for emotional interpretation…

And ripe for translating to memes.

This is amplified by the fact that the characters are sea creatures, so they can have wacky and gruesome postures that would otherwise be odd and maybe appalling if done to human characters.

Pause an episode of Spongebob anywhere, and there’s a good chance you could use that frame as a meme because the emotions are easy to interpret.

Because we assume that this chicken-like position Spongebob takes refers to mocking something, we know to read the text in a sarcastic tone.

In this particular meme, I’m using it as an argument to “mock” anybody who says they can’t absorb information in audio format.

Mocking Spongebob memes always have text in random lowercase and uppercase assortment, and sometimes with letters swapped. Because of this meme, if you ever want to send a sarcastic text, but you’re not sure if they will perceive it as sarcastic, write it in this format.

It has become part of our culture, spawning even more enthymemes independent of the show.

Brian Koppelman, the screenwriter of one of the best shows on television, Billions (not up for debate) said on the making of his smash movie Rounders that their main intention was to make “A movie that people would want to quote to each other.”

If it’s easy to quote, it’ll get repeated among friends all the time, which is exactly the case with Spongebob. My friends and I, 10 to 15 years after watching some episodes, will still pull quotes out on command.

Quotability feeds into the memes because often the text goes hand in hand with original quotes from the show.

They also contain a certain emotion or intent behind them, which makes the quotes useful to apply to various situations and arguments.

A great example of this is the Imagination meme, which can be replaced by almost any word and fit right in with the original context.

The “imagination” quote comes with a marquee,  slow delivery that’s lodged in my brain.

In this case, the meme makes an explicit persuasive case for caffeine, for coffee, for the products in their coffee shop. This Spongebob meme makes a better argument for coffee than any coffee commercial.

For example, a YouTube search of “Squidward relatable” brings up dozens of compilation videos with hundreds of thousands of views.

One that comes to mind for me is the procrastination episode, where Spongebob struggles to write his paper for boating school. We have all struggled with procrastination, so we can easily relate to it.

Beneath the layers of the meme, there’s an enthymeme that we understand what the character is going through, and relate to it.

An example of the relatability at play is the “Squidward chair” meme. 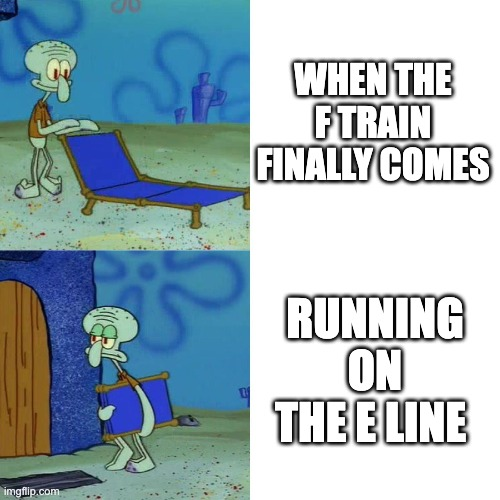 With little knowledge of Spongebob, you can figure out the context.

We relate to this experience because we’ve all been excited for something, only to have it quickly ruined. We didn’t even get mad about the experience, sometimes we just get annoyed, like Squidward.

We put ourselves in Squidward’s shoes and relate to the meme.

(Also a PSA, check the route on E and F trains on weekends if you plan on taking either; they’re doing construction.)

How familiar are these Spongebob facts? How ubiquitous are the quotes used in the memes, or the emotions on their faces, or the familiarity of the scene? Which audiences will get it, and how does this affect its potential for virality?

While there is a common cultural understanding of some aspects, “common” is relative.

In general, this speaks to the risk of basing arguments on references, on assumptions of shared knowledge.

The prolific New Yorker writer John McPhee in his book, Draft No. 4: On the Writing Process, advises in a writing format that you can make references to enhance something, but you shouldn’t rely on it.

He writes, in typical McPhee fashion, “You will never land smoothly on borrowed vividness. If you say someone looks like Tom Cruise—and you let it go at that—you are asking Tom Cruise to do your writing for you.”

For example, the “Squidward window” meme is one the most popular templates. It incorporates a few of the traits we’ve talked about, and it doesn’t require specific context. In fact, it has been stripped of the initial context.

In this image we see Spongebob and Patrick both with their knees bent, presuming they’re in motion. They have smiles on their faces (Patrick’s easily visible) and their arms are thrown up in the air.

This gives the impression that they’re having fun outside. We don’t see squidward’s face, but we do see him looking out the window, presumably looking at Spongebob and Patrick. The shade is open, giving more of an impression that he’s making a conscious choice to look at them. In this episode, Squidward is annoyed that they’re being loud in front of his house.

However, the meme morphed into a feeling of “FOMO.” Based on the picture, it has become interpreted as Squidward missing out on their fun. We’re going to pick on Apple again for our example.

This has become the new cultural understanding of the meme. It has shifted from the original context to relate to “FOMO,” rather than being annoyed.

The meme has become so popular, that this is the new enthymeme. It’s no longer about what happens in the show, it’s about the meme itself, similar to Mocking Spongebob.

Often the most popular memes embed their own enthymemes, independent of the show.

What can we learn from all of this?

Spongebob will live on while its contemporary shows stay in the early 2000s. And it’s not that it was a “better” show compared to other great 2000s Nickelodeon shows (Fairly OddParents, anyone?).

But these elements which give it remarkable meme potential, also give it staying power.

The emotions, the quotes, and how much we resonated with the characters and plots stayed with us long after we finished watching the show.

For our purposes, we can learn from this when constructing our own arguments.

Images matter, and we’re drawn to emotions. As a writer, I know the value of words. I’ve come to appreciate the power of images.

Second, the idea of quotability relates to everything in writing. We want our phrases to be memorable as well as the deliverability of those words.

Finally, whether you’re a content creator or not, we want people to be able to relate to us. If they feel like we are sharing an experience with them, they’ll be drawn to that.

Under this umbrella, though, do not forget that it’s Aristotle’s idea of enthymemes that underlies all of it. As you move through life now (and look at memes) notice which assumptions are guiding arguments.

These factors from our fictional friend in a pineapple under the sea will play into whether we capture an audience, and whether they stay entranced by our arguments years down the line.